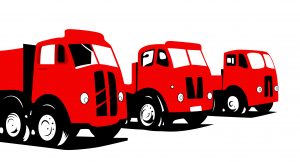 A Brief History Of The Ulster Vintage Commercial Vehicle Club

Below is the history of the club. This was written by Raymond Walls, a founding member of the club.

From little acorns doth the oak tree grow, the same can be said about the Ulster Vintage Commercial Vehicle Club. During the 1970’s if one owned a vintage lorry, Bus or fire engine the only road run available were the AOVC runs. These runs started in Belfast and finished at Armage, Portrush & Newry. When I attended my first Belfast to Portrush run in 1980 all 175 entrants were Pre-1939. At that time approx. 8-12 lorries and buses attended these runs. The Old green U.T.A. and the red Belfast corporation buses were a lovely Spectacle.
During the lunch break at Ballymena on the Belfast to portrush run many of the lorry & bus men had a discussion about having a “Wee Run” of our own. For a number of months nothing happened until the AGM of the AOVC when Martin Carmont, Tommy Elwood & Myself attended. After the AGM in February 1981 the 3 of us agreed to ring everyone we knew who owned a vintage lorry or bus to a meeting at Martin’s house. On that night about 10-12 attended and there began the start of our wee club.

At that time our members were mainly from the greater Belfast area. Our first run took place in 1983 starting at the Folk & Transport museum Cultra, finishing at the Quarry Inn, Dundonald. From memory about 12 vehicles took part Bedford, Albion, AEC, Leyland Guy vehicles and a couple of Austin Champs attended on our inaugural run. A very enjoyable day was had by all. Our early club meeting were held in Belfast at the youth hostel at the top of the Ormeau road. As more members joined from the rest of Northern Ireland the club moved our meeting’s to Moira and then to Randalstown to our club members John O’Kanes bar were we have attended for over 21 Years now (a sincere thanks to John for the use of your premises and the tea supplied)

Today our members are from all six counties of Northern Ireland, With quite a few from the Republic, and a small number from England And Scotland. During the early 1990’s with increasing membership there was a demand for a weekend together-Thus starting our famous 2-Day Run. Our first day run attended 40 vehicles with a few coming all the way from England And Scotland. Last Year (2019) we had over 60 vehicles attending with some  coming over from the mainland. we are very indedit ed to all the entrants.   As well as our 2-Day run we now have a run for each county for different months of each year. These are very popular events. As our club has now come of age having passed its 39th Birthday and having a membership in excess of 150 members a great future is assured for the long term.

As well as owning & caring for our vehicles great friendships have been built up over the years. Our club meeting often has 30-40 members present many travelling long distances for the fun & craic. This year our club gave away over £6000 to different charities thus helping people in need . It is always nice to know that whilst enjoying ourselves we can help others less fortunate than ourselves. On a personal note when the club was formed many of our famous lorry names such as AEC, Leyland, Austin, Bedford, Ford, ERF Atkinson Etc. were at the fore front of British engineering.

Today these are sadly all gone being replaced by Scania, DAF & Volvo Etc. With no dis-respect to these brands it is doubtful if many of todays trucks will see the rally circuit in 39years time due to their high-tech computers Etc.
Let us raise our glasses to the next 39 years – enjoy your Vintage Commercial Motoring.